When he came to Nazareth, where he had been brought up, he went to the synagogue on the sabbath day, as was his custom. He stood up to read, and the scroll of the prophet Isaiah was given to him. He unrolled the scroll and found the place where it was written: ‘The Spirit of the Lord is upon me, because he has anointed me to bring good news to the poor. He has sent me to proclaim release to the captives and recovery of sight to the blind, to let the oppressed go free, to proclaim the year of the Lord’s favour.’ Matthew 25:34-36

Then the king will say to those at his right hand, ‘Come, you that are blessed by my Father, inherit the kingdom prepared for you from the foundation of the world; for I was hungry and you gave me food, I was thirsty and you gave me something to drink, I was a stranger and you welcomed me, I was naked and you gave me clothing, I was sick and you took care of me, I was in prison and you visited me.’ Mark 10:21-22

Jesus, looking at him, loved him and said, ‘You lack one thing; go, sell what you own, and give the money to the poor, and you will have treasure in heaven; then come, follow me.’ When he heard this, he was shocked and went away grieving, for he had many possessions. Mark 12:41-44

He sat down opposite the treasury, and watched the crowd putting money into the treasury. Many rich people put in large sums. A poor widow came and put in two small copper coins, which are worth a penny. Then he called his disciples and said to them, ‘Truly I tell you, this poor widow has put in more than all those who are contributing to the treasury. For all of them have contributed out of their abundance; but she out of her poverty has put in everything she had, all she had to live on.’ Luke 14:12-14

He said also to the one who had invited him, ‘When you give a luncheon or a dinner, do not invite your friends or your brothers or your relatives or rich neighbors, in case they may invite you in return, and you would be repaid. But when you give a banquet, invite the poor, the crippled, the lame, and the blind. And you will be blessed, because they cannot repay you, for you will be repaid at the resurrection of the righteous.’ Luke 11:39-42

Then the Lord said to him, ‘Now you Pharisees clean the outside of the cup and of the dish, but inside you are full of greed and wickedness. You fools! Did not the one who made the outside make the inside also? So give for alms those things that are within; and see, everything will be clean for you. But woe to you Pharisees! For you tithe mint and rue and herbs of all kinds, and neglect justice and the love of God.’ Luke 12:16-21

Then he told them a parable: ‘The land of a rich man produced abundantly. And he thought to himself, ‘What should I do, for I have no place to store my crops?’ Then he said, ‘I will do this: I will pull down my barns and build larger ones, and there I will store all my grain and my goods. And I will say to my soul, ‘Soul, you have ample goods laid up for many years; relax, eat, drink, be merry.’ But God said to him, ‘You fool! This very night your life is being demanded of you. And the things you have prepared, whose will they be?’ So it is with those who store up treasures for themselves but are not rich toward God.’ Psalm 41:1

“Blessed is he who considers the poor; The Lord will deliver him in time of trouble.” Proverbs 14:31

“He who oppresses the poor reproaches his Maker, but he who honors him has mercy on the needy.” Proverbs 22:22-23

“Do not rob the poor because he is poor, nor oppress the afflicted at the gate; For the Lord will plead their cause, and plunder the soul of those who plunder them.” Zechariah 7:10

“Do not oppress the widow or the fatherless, the alien or the poor. Let none of you plan evil in his heart against his brother.” Matthew 19:21

“Jesus said to him, “If you want to be perfect, go, sell what you have and give to the poor, and you will have treasure in heaven; and come follow me.” Galatians 2:10

“They desired only that we should remember the poor, the very thing which I also was eager to do.” James 2:2-4

“For if there should come into your assembly a man with gold rings, in fine apparel, and there should also come in a poor man in filthy clothes, and you pay attention to the one wearing the fine clothes and say to him, ‘You sit here in a good place,’ and say to the poor man, ‘You stand there,’ or ‘Sit here at my footstool.’ Have you not shown partiality among yourselves, and become judges with evil thoughts?” James 1:27

Pure and genuine religion in the sight of God the Father means caring for the orphans and widows in their distress and refusing to let the world corrupt you. (NLT) James 2:15-16

Suppose you see a brother or sister who has no food or clothing, and you say, ‘Good-bye and have a good day; stay warm and eat well’ but then you don’t give that person any food or clothing. What good does that do? Luke 3:10-11

And the people asked him, saying, What shall we do then? He answereth and saith unto them, He that hath two coats, let him impart to him that hath none; and he that hath meat, let him do likewise. Isaiah 61:1

“The Spirit of the Lord God is upon Me, because the Lord has anointed Me to preach good tidings to the poor; He has sent me to heal the brokenhearted, to proclaim liberty to the captives and the opening of the prison to those who are bound.” There are many more verses that commands us to help the needy and to share our resources with the meek, the children, the widows and the poor! Michael Triple Grace 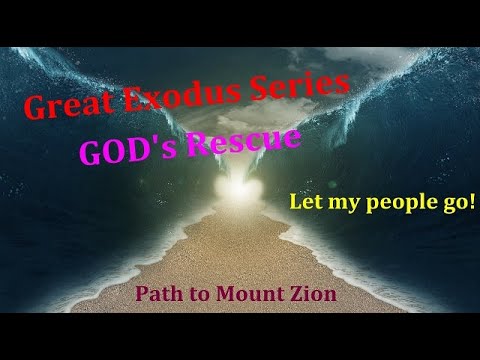 The great Exodus - The most important Video of your Life!

Prophetic Word for the 9th of April 2021

Prophetic Word for the 8th of April 2021

Prophetic Word for the 7th of April 2021

Prophetic Word for the 6th of April 2021

Prophetic Word for the 5th of April 2021

Prophetic Word for the 4th of April 2021

Prophetic Word for the 3rd of April 2021